In the year 2007 Totleben began writing his first songs, his musical interests bound to his inspirational roots. He had combined the coldness and anger of Black Metal with elements of classical music to create an aggressive and cinematic feel to his compositions. But the music was not meant to be solely instrumental, he contacted his good friend Narbengrund. Since Narbendgrund had a natural talent for writing and performing lyrics he was perfect for the ideas Totleben had in mind and so Narbengrund was made a founding member of the Black Metal act “Totengeflüster” (Whispers of the Dead). The main goal for Totleben and Narbengrund was to create a coherent and sophisticated piece of art. In this formative period Totleben was also producing artwork, videoclips and illustrations for bands such as Keep of Kalessin (Nor), Necronomicon (Canada), Imperium Dekadenz (Ger), Lyfthrasyr (Ger) and Unlight (Ger). Through these close professional connections with the bands he was introduced to Frostbitten, an already highly regarded Death Metal drummer. Frostbitten told Totleben of his interest in playing in a Black Metal project, so Frostbitten became the prominent session and live drummer for Totengeflüster. In the winter of 2012 Totengeflüster self released their debut album entitled “Vom Seelensterben”. It was a conceptual album which, dependent on point of view thematised either the cruelty and horrors of the night, or of human nature. The album received critical acclaim around the globe and Totengeflüster were eager to present their darkness upon stages around the world. This is where it was decided to take a new path and incorporate two new members into their ranks… These new additions bore the names Rorschach, who sold his soul to his bass guitar and Frevelsaat, who became the second six stringed warlock of the quintet. From this moment onwards a new era began for Totengeflüster, they were now able to perform their art away from soundcarriers like CDs or streaming and bring their theatrics to the big stage. Since the debut album appealed especially well to fans in the United Kingdom it was decided, despite all the organisational and logistical difficulties, the band would play their debut concert in England to honour the legions of fans who had supported them from the beginning. On the 23rd August 2014 the band played their debut show in Bromsgrove, near Birmingham at the sold out Beermageddon Festival taking a co-headline slot on the billing. Just weeks later on the 4th of October Totengeflüster conquered stages in their native Germany as they co- headlined the 10th anniversary of Tübingens Metalnight in total darkness. Later Totengeflüster joined Unlight for two shows in November 2014 and again in June 2015, in addition to this they also shared the stage with Negator and Eis in November 2015….. This was just the beginning… Between November 2014 and December 2015 Totengeflüster wrote and recorded their sophomore album im nebel der vergänglichkeit (into the mists of transience) which was subsequently mixed and mastered by Andy Classen at Stage One Studios started on March 6th 2016. One day before Totengeflüster played in front of more than 150 paying guests together with Mor Dagor and Firtan in Tübingen. But not only the music needed to be made – Totleben created all Artworks that where needed to fill a 24 pages booklet and digipack. He also filmed and produced Totengeflüsters newest music video. On August 18th 2017 „Im Nebel der Vergänglichkeit“ was released and just on this day the german Black Metal Band EΪs had to cancel their gig at Summer Breeze Festival and Totengeflüster played instead of them. In August 2017 the band also had a mini tour in England and played at the Beermageddon Festival, as well as in Ipswich and in London. In Spring 2018 Totengeflüster played to gigs with Wolves Den in Radolfzell and Munich. On the 24th of August 2018 Totengeflüster released their first Blueray including a bonus CD, which was filmed at Beermageddon 2017. Also the band played at Wolfszeit Festival in August 2018. In December 2018 they played with Imperium Dekadenz and Firtan at Metalnight Tübingen. In Spring and Summer 2019 the band recorded their new album „The Faceless Divine“ and signed with Black Lion Records. Two concerts (Offenburg with Dark Zodiak and Oberhausen with Convictive, Krähenfeld and Frostland) were played in June 2019. On the 11th of October Totengeflüster will unleash their new opus „The Faceless Divine“ unto this world! Afterwards they will have a small tour through germany in late october and november. 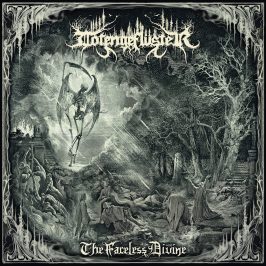