Legacy Of Emptiness is unveiling their new chapter as they are to release their sophomore full length ‘’OVER THE PAST’’ via Black Lion Records. All splendidly mixed and mastered by Dan Swanö, one of the biggest inspirations of the band. Dan Swanö even performed Lead guitar on ‘Evening Star’, final track from the album.

There is no real lyrical concept on this album other than the usual suspects like darkness,hopelessness,void and the odd historical moments. Musically it’s the opposite of what the band did on their debut. This time all songs are brand new except for one that they brought along from the 90’s, heavily reworked. The cover artwork is based on the song ‘Four Hundred Years’ wich is about the ‘night of the four hundred years’ that is a description of the years Norway were ruled by foreign kings. The artist, Alex Tartsus,really caught the nerve in the lyrics and created this masterpiece.

Over the Past is a journey towards the fantasy realm, where darkness and melody equally reign together. 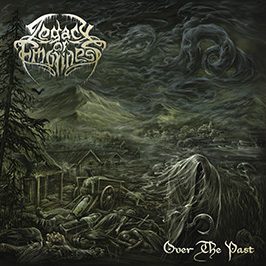